There are many different designs using water electrolysis technology used in hydrogen generation which is then introduced as an additive into the fuel stream of combustion engines.

Hydrogen Generator, US Patent 1975. A hydrogen generator constituted by a voltaic cell having a reactive magnesium electrode and a non-reactive electrode immersed in a salt-water electrolytic bath, a load being connected between the electrodes to cause a current flow in the cell resulting in an electrochemical reaction in which the magnesium is decomposed to produce hydrogen and in electrolysis in which the water is decomposed to produce hydrogen. 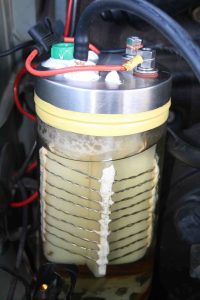 Stanley Meyer: Water Fuel Cell – Eye-witness accounts suggest that US inventor Stanley Meyer has developed an electric cell which will split ordinary tap water into hydrogen and oxygen with far less energy than that required by a normal electrolytic cell. In a demonstration made before Professor Michael Laughton, Dean of Engineering at Mary College, London, Admiral Sir Anthony Griffin, a former controller of the British Navy, and Dr Keith Hindley, a UK research chemist. Meyer’s cell, developed at the inventor’s home in Grove City, Ohio, produced far more hydrogen/oxygen mixture than could have been expected by simple electrolysis.