Trending
You are at:Home»Wood Stoves»Micro Gasification
By admin Wood Stoves 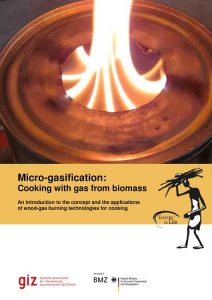 “Micro gasification for household cooking is a relatively young development. The principle was invented in 1985 and the first commercial micro-gasifier was available in 2003. Recently many more people are becoming aware of the concept and the potential of micro gasification. New developments come up virtually every day.

Because gasifiers require high temperatures and heat transfer into cold biomass, making them small is difficult. As such, it has been a challenge to make biomass gasification suitable for domestic cooking! Commercially viable gasifiers have long been understood and used in large industry and even in transportation: over one million vehicles were fueled by biomass (mainly charcoal) gasification during WWII, when liquid fuel was hard to come by. But there was nothing similar for small applications such as a household stove. The most common and best known industrial applications are downdraft gasifiers, where the gases are generated and removed from the reactor (gas-generator), then combusted in a remote burner, e.g. in an internal combustion engine or in a street-lamp supplied by town gas.

Fundamentally, the challenge in cooking is a question of scale; how to gain control over the pyrolysis, gasification and combustion in a small enough (vertical) space to be used by individual households. (successful designs can be found in the gasifier stoves download section of this site).

Micro gasification refers to gasifiers small enough in size to fit under a cooking pot at a convenient height. It was conceptualised as a top-lit up-draft (abbreviated TLUD) process in 1985 and developed to laboratory prototype stages by Dr. Thomas B. Reed in the USA. Independently in the 1990s the Norwegian Paal Wendelbo developed stoves based on the same TLUD principle in refugee camps in Uganda. TLUD devices have always been intended as biomass-burning cook-stoves and there were some early Do-It-Yourself backpacker efforts, but it was only in 2003 that the first micro-gasifier was commercially made available by Dr. Thomas B. Reed when he presented the Woodgas Campstove to the outdoor camping niche

market in the USA.”