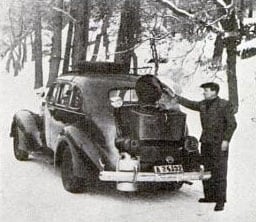 “At the finish line of a 250 mile automobile race the other day the checkered flag waved down a strange-looking winner. Strange, at least to Americans, for it was a charcoal burner. The event was the Uppland race in Sweden, where, as in most of wartime Europe, gasoline is precious and substitutes are used in automobiles. On the back of the winning car, a Studebaker, was mounted the charcoal gas generator from which the gas driven off during incomplete combustion is fed to the cylinders. About 12 pounds of charcoal are the equivalent of a gallon of gasoline. There is a loss of about 30 precent in efficiency as compared with gasoline” – Article from September 1941 in Popular Mechanics.

It is also interesting to note that the Studebaker Charcoal Burner trucks formed part of the Russian fleet of heavy trucks in 1945 (from Planned Invasion of Japan, 1945: The Siberian Weather Advantage, Hatten Schuyler Yoder).

In the book From Nanango to Cooktown,  Lennie Wallace tells how gas producers were used during the second World War. “Strange contrivances, charcoal burners or gas producers, began to appear on some cars. Usually, an apparatus which burnt charcoal was attached or welded to the rear bumper and the ‘gas’ produced was stored in a balloonlike sac on the car’s roof. From there, the gas was somehow taken to the motor as fuel. It did work. The cars drove sedately along the roads but the clouds of stinking black smoke from their exhausts were truly remarkable. Kurt Johannsen, writing in his book A Son of The Red Centre  remembers the gas-producer he made for his 1928 Studebaker car. He could easily drive a mile on one and a half pounds of wood. (approximately, as he wrote, a kilogram per kilometre on a three ton vehicle). The Studebaker could do 8 miles (13km) on the burning of a wooden beer crate made to hold five dozen bottles. He proved it by driving from Tennat’s Creek pub to the Telegraph Station with a top speed of 105km per hour and winning a five pound ($10) bet.”

The picture at the top of the page is a 1940 Studebaker Commander Sedan with gas producer used in the war years.