During WWII, Commercial Motor Vehicles designed and manufactured Brig Gas Producers as an alternative fuel during petrol rationing.  The company was headed up by Sidney Crawford and had 40 staff fitting the gas producers to vehicles.

The Mail (Adelaide, SA) ran an article along the following lines on Saturday 25 May 1940:

Many new and unusual features are incorporated in the Brig gas producer, which has been developed over four years, inspired by research and the need to eliminate many undesirable features previously associated with mobile gas producers. New features include a fully automatic mixture control, fully automatic water injection, automatic power boosting for emergencies. The unit is compact, lightweight and easily fitted to all types of vehicles with very little maintenance required. The ashes and dust are easily and cleanly removed. There is an efficient double-cyclone dry cleaner and oil bath security cleaner, rectangular hopper and easily cleaned grate, no refractory linings, good appearance, and reasonable cost.

The automatic working is a great advantage. There are no extra controls except the change-over button (from petrol to gas). The mixture is automatically enriched for idling and going downhill, so that the producer is kept working properly. The automatic water injection saves another control and takes the guess out of its adjustment. The power booster operates automatically when the single accelerator is opened up fully. When running ninety percent of time this is done without using the booster. The convenience is having the booster available which avoids losing anywhere between 25 to 45 per cent, of power output if using gas on an unmodified engine.
Using the change-over button immediately causes the original carburettor to function normally. For short hauls,  the vehicle can be driven on petrol without altering the original performance. On trucks the hopper fits neatly under the tray without affecting the live load carrying area, except for a small box on one side of the tray, where the hopper is filled from the side. 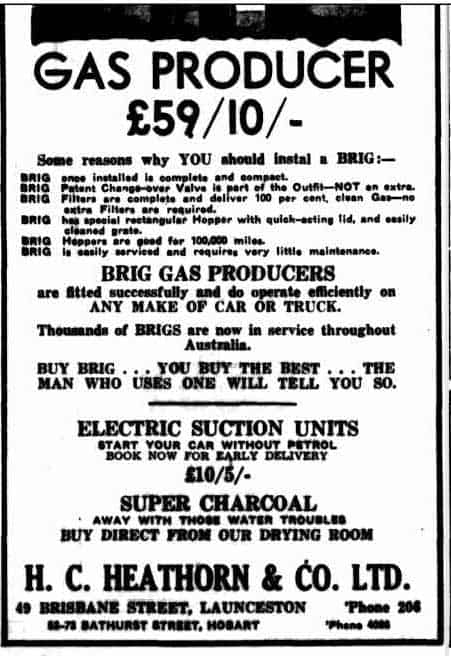 Advert for Brig Gas Producers as it appeared in the Examiner (Launceston, Tasmania) on Saturday 1 August 1942