As a technology, gasification is more than a hundred years old, and in terms of small scale units it possibly peaked before and after WWII. This was due to the shortages experienced with liquid petroleum but once oil became available the gasification units disappeared. You can see some of these early designs on the Old Vehicles page.

Fuel gas, produced by the reduction of coal and peat, was used for heating as early as 1840 in Europe and by 1884 had been adapted to fuel engines in England. Prior to 1940, gas generator units were a familiar, but not extensively utilized, technology. However, petroleum shortages during World War II led to widespread gas generator applications in the transportation industries of Western Europe. (Charcoal burning taxis, a related application, were still common in Korea as late as 1970.)

In occupied Denmark during WWII, 95% of all mobile farm machinery, tractors, trucks, stationery engines, and fishing and ferry boats were powered by wood gas generator units. Even in neutral Sweden, 40% of all motor traffic operated on gas derived from wood or charcoal. All over Europe, Asia, and Australia, millions of gas generators were in operation between 1940 and 1946. See the Gasifier History page for more detailed information.

These terms often appear to be used interchangeably; however there are differences in the way biomass is thermochemically converted under each process and also in the end product.

Pyrolysis of biomass takes place at temperatures in the range of 400°C to 450°C which is below the temperature of combustion (850°C – 1,000°C). It is often used to convert solid biomass to a liquid fuel.

Torrefaction is similar to pyrolysis but takes place at temperatures in the range of 200°C to 320°C and the objective is to create an energy dense, solid biofuel, which is often called ‘biochar’ or ‘bio-coal’.

Gasification take places at much higher temperatures than pyrolysis and torrefaction, and the main objective is to produce a clean gas which can be used in an internal combustion engine or to produce electricity. There are some ‘gasifiers’ which don’t produce gas for end use, but are simply heating gasifiers, used to cook with or heat homes.

The use of the gasifier technology has ebbed and flowed, but with the steady rise of oil price and to a less extent environmental concerns the technology is once again being researched and used. Older designs like those published by FEMA (on our download page here) leave a lot to be desired and although there are many new small scale units available there doesn’t yet appear to be a lot of feedback in terms of efficiency and where they sit on the development continuum. Gasifiers in the medium to large scale to generate electricity have wider application around the world.

Renewable dry biomass is extremely abundant, but only a highly selective small fraction is utilised for energy. Available technology for gasification could utilize a much wider variety and greater quantities of the biomass and provide significant energy while alleviating several pressing environmental concerns. However, the idea of converting biomass into a more energy dense feedstock to replace fossil fuels needs to be tempered, as issues around sustainability are very real.

All internal combustion engines run on vapor, not liquid. The liquid fuels use by petrol engines are vaporized before they enter the combustion chamber. The purpose of a gasifier is to transform solid fuels into a gas and to keep the gas free of harmful constituents. There are many solid biomass fuels suitable for gasification from wood and paper to peat, lignite, coal, rice husks, sawdust etc. The aim of gasification is the almost complete transformation of this material into a gaseous form so that only the ashes and inert materials remain.

In gasification, the energy in biomass or any other organic matter is converted to combustible gases (mixture of CO, CH4 and H2), with char, water, and condensable as minor products. Initially, in the first step called pyrolysis, the organic matter is decomposed by heat into gaseous and liquid volatile materials and char (which is mainly a non-volatile material, containing high carbon content).

In the second step, the hot char reacts with the gases (mainly CO2 and H2O), leading to product gases namely, CO, H2 and CH4.

The producer gas leaves the reactor with pollutants and therefore, requires cleaning to satisfy requirements for engines. Mixed with air, the cleaned producer gas can be used in gas turbines (in large scale plants), gas engines, gasoline or diesel engines (Salam, Kumar and Siriwardhana, 2005).

What separates these types different is how and where the biomass sits in the reactor vessel, the direction of both air flow and the feedstock. Generally, fixed bed gasifiers are a lot simpler, less expensive, and produce lower heat content, for example producer gas. Fluidized bed gasifiers are more complicated, more expensive, and produce a gas with a higher heating value. 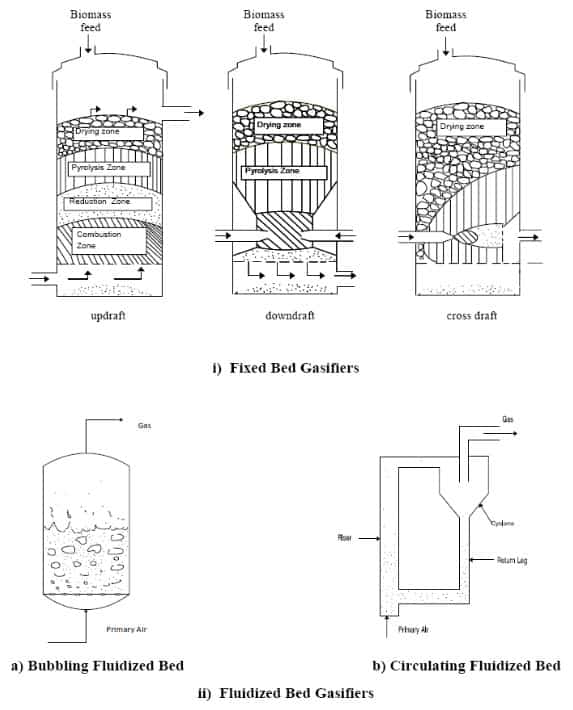 This is mentioned as gasifiers produce tar and it must be dealt with if the gas is going to be used to run and engine or gas turbine. Tar is not so problematic if the gas is burned directly in a boiler to produce heat. The cleaning of gas and removal of tar are still one of the major technical issues associated with using gasifiers. It is worth noting that, “The low tar levels of downdraft gasifiers make them more suitable for uses requiring clean gas” (Milne and Evans, 1998 see Academic download section).