The Allen Gas Producer appears to have been patented in the USA and Australia, the USA patent date 2 January 1918 and the latter on 27 July, 1914.  George Hamilton Allen was an engineer from Collie, Western Australia who died on Tuesday 5 September 1922. He was born at Cossack in 1890 which is an old ghost town located 1,480 km north of Perth and 15 km from Roebourne in the Pilbara area of Western Australia.

It is interesting that the patents pre-date the WWII fuel shortages and the many other gasifiers developed around this time. The Bunbury Herald and Blackwood Express reported on his death, “… he was an inventor of marked ability, the Allen Gas Producer being but one of his many achievements in the world of engineering. It is well known at the time of his death he was engaged upon the construction of an engine that had it been completed, would have revolutionised the engineering world of today.” 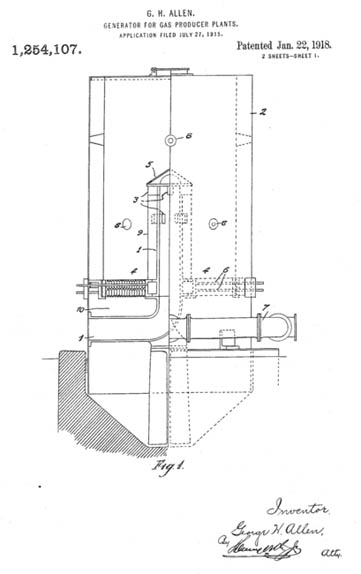 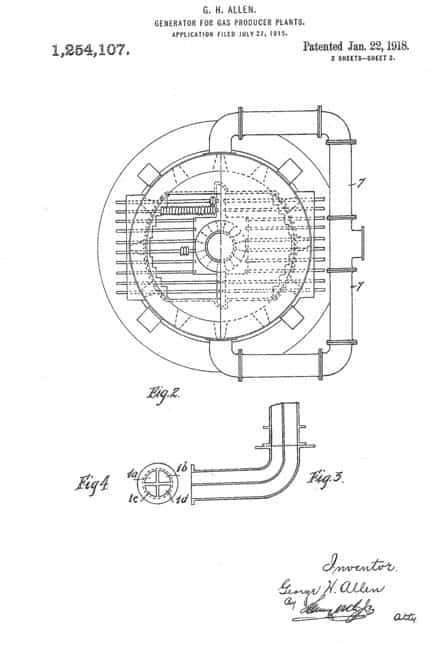 I have not seen an image of the gasifier and wonder if it ever went into production. In the US patent the images above and a description are provided:

“Producer plants for the combustion of fuel therein have not been conducive to the even and complete consumption of the same, inasmuch as the outer surfaces only of the mass of fuel receive a sufficient supply of air, while the heart or interior of the mass obtains little or none, with obviously unsatisfactory results.

The object of this invention is therefore to overcome this objection and provide means whereby the heart or interior of the mass of fuel, as well as the outer surface may receive the requisite supply of air, previously heated, for the more complete combustion and even consumption of the fuel, in the process of generating gas, and thereby to improve the quality of the gas produced and to generally increase the efficiency of such appliances.

In carrying my invention into effect I employ one or more air-intakes, ducts or the like to convey heated air to the heart or within the mass of the fuel, such intakes or ducts being so situated that the air in its passage becomes heated and rises therein. Supplementary air inlets or ports, each fitted with a means of controlling its supply of air may also be provided in the wall or walls of the outer shell of the generating chamber in conjunction therewith if desired.

In my preferred form of construction I utilize a cylindrical formation of shell or outer wall and form the air intake or duct in such a manner that it enters the generating chamber in the vicinity of the fire zone and rises centrally and to a convenient height therein. This centrally placed air-intake duct or ducts, preferably of tubular formation. is formed or provided with ports or orifices for the delivery of the heated air which it conveys, and as it terminates beneath the door through which the fuel is fed, it may have a conical shaped end or be provided with a conical shaped cover or the like for the prevention of fuel lodging thereon and for the protection of its ports or orifices.”