The fan jet stoves, forces air into the combustion chamber and increases air turbulence for the mixing of the air and gases, which can result in  better, more complete combustion than regular stoves but they are not strictly gasifier stoves. 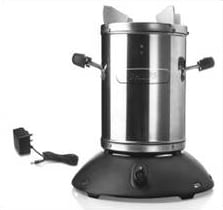 he Philips Smokeless Stove cooking stove fueled by wood, dung, or other biomass. The African Clean Energy (ACE) company is family owned with support from Royal Philips Electronics and the South African Industrial Development Corporation. The stove was designed by Paul van der Sluis, who is principal research scientist at Philips Research Laboratories in Eindhoven in the Netherlands. The stove principle is not overly complicated: air is forced into a combustion chamber at the top and bottom of the stove. Heat then vaporises the wood or biomass fuel and the flame is smokeless once the stove is running. As the fuel burns reasonably efficiently, the stove uses less fuel than a conventional fire. To contain the high heat, heat resitant materials are used. No prices on the website by contact details are available. 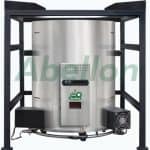 Abellon EcoEquipments Limited operates from an industrial location at Ahmedabad, Gujarat, India and they manufacture and supply a range of stoves including the Smart Cooking Stove used in restaurants, hotels, food court, and canteens. These appear to be ‘pellet‘ stoves, that is, they run on wood pellets made from biomass. This stove is 600mm x 600mm x 631mm high and weighs in at 48kg so is pretty hefty, although the company also makes domestic sized units.  The stainless steel unit runs of 240v, fan speed is variable, and has a display panel with charging indicator with in-built battery back up. 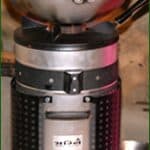 The Angi cookstoves are another in the line up of fan jet stoves that uses rice husk as fuel.  The stove is manufactured by Nav Durga Metal Industries (Bharat) in India who have developed more than 10 designs. The Angi Star uses 1/2kg of rice husk per batch with a 40 min burn time whilst the larger Angi Sun takes 1kg of rice husk for a cook time of about 70 minutes. A controller/power box is provided along with the fan jet stoves which can also charge a battery. The box also controls the fan’s speed. The power box has two sockets accepting 230V electricity or a 10W Solar Panel. The power box is configured with a LED Light and also a 5in1 DC Mobile Charger to charge a mobile.

BioLite has developed and manufactures camping wood stoves. The BioLite stove was invented by Alexander Drummond and

Jonathon Cedar and the company has headquarters in Brooklyn, NY. The picture of the larger HomeStove on the right is only being distributed through pilot projects in India, Uganda and Ghana. The company claims 50% less wood is used, with a 95% reduction in smoke. Innovation extends to the conversion of heat into electricity. The yellow attachment provides users with the capability to charge mobile phones and LED lights. The sales of the camping stove will fund further development of the BioLite fan jet stove product.