The photo of gas bag buses was taken in Shandong, China, in 1965 and shows a number of gas bag buses travelling along a street.  As stated by Low-tech Magazine the buses continued to be used “in some regions of China and other Asian countries until the 1990s.” The bus below in Chongqing was still in use up until the late 1970s (Source: Beijing Review, Image courtesy Hu Fei). 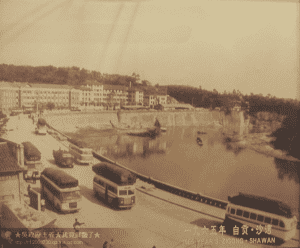 As the bags  were not pressurized as such, the ‘fuel tank’ had to be very large to get any reasonable distance using the gas. The sheer roof size meant buses were better suited for big bags than cars. Some gas bags were  enclosed in a streamlined fairing and often they were simply strapped to the roof. 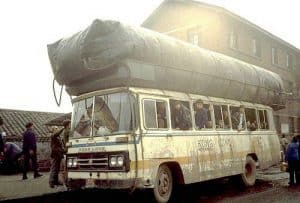