Printed in the The Mail, Adelaide, Australia, Saturday 29 June 1940

“A recent issue of the Sydney ‘Daily Telegraph’ reports particulars of a fast trip between Melbourne and Sydney, when a Pontiac car carrying two passengers and fitted with a “Wishart” Producer Gas Unit, covered the 569 miles in record time, and reached a maximum speed of 72 miles per hour, with a total fuel cost of 6/9 for each passenger for the complete trip.

This concern has a 30 cwt. truck, usually loaded with two tons and drawing a 5-ton trailer load on a daily average of 100 miles. Mr. Sides states that the unit is easily understood and operated by the average truck driver, and only requires five minutes each morning to clean out and recharge with fuel and water. The unit has already covered over 25,000 miles, with an enormous saving in running costs.

Mr. Andrew Wishart has recently been in Adelaide for a number of weeks, supervising a number of installations for the South Australian and West Australian (also Broken Hill) Manufacturing Distributors for the Wishart Producer Gas Unit (Horwood Bagshaw Ltd.). and after leaving for Melbourne last Friday at 3 p.m., he completed the trip to Melbourne at a fuel cost of 10/1.

The ‘Wishart’ Unit requires no fire clay furnace lining, is built up in a one piece unit, galvanised throughout both inside and outside to completely eliminate corrosion from gas or water, and is maintaining a leadership established throughout the eastern States over the past five years.

Recent Adelaide deliveries include units to Harris Scarfe Limited, Clarkson Limited, and several units for the Engineering and Water Supply Department of the South Australian Government. Clients are satisfied that it pays to purchase a unit with a well-proven and established reputation for simplicity. economy, accessibility, and long life, and Horwood Bagshaw Limited, of 78 Currie Street Adelaide, will be glad to furnish full details of Wishart Producer Gas Unit, or to arrange a test with their Demonstrator Truck, for any interested reader.” 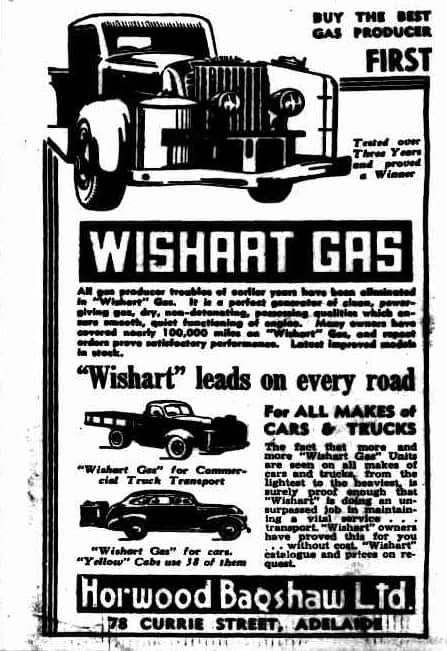